Have a Fried Green Tomato in December!

Hello, Saxon here enjoying a cloudy day at the beginning of Fall in Rockcastle County.
This morning I admired 6 jars of green tomatoes, sliced thick and water-bath canned with spring water, lemon juice, and salt, sitting on the counter in our kitchen here at ASPI.  These were made a few days ago after we cleared out some plants to make way for fall cabbages. 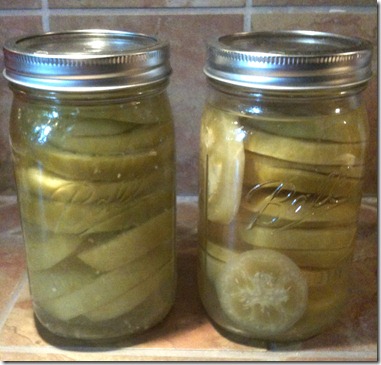 I really enjoy the occasional side of fried green tomatoes and with all the fruits and vegetables we’ve produced here this summer I’ve been trying my hand at canning for the first time in my life in order to keep the bounty from going to waste.  Now I’ve found a way to keep green tomatoes local and ready for frying year round!  This is all really thanks to one of are most active participants, Armilda Barnes, who cans anything and everything, down to corncob jelly.  She was already canning green tomatoes a month or so ago when we last went to see her, but I haven’t had the chance to try it out myself until now, after cleaning out the garden plot some.

Perhaps canning green tomatoes is not unfamiliar to some of you, but I hope that some will be excited by this idea, as I am.  Because if you’ve ever tried to freeze sliced green tomatoes and use them later for frying, you know what a let down these can be, if not a total mushy failure.  I look forward to trying the canned version out this weekend.  Happy canning!

About the Author: Candace Clark