During the early years of the School and before, every piece of land was precious and was often cultivated to the top of the ridges.  This extensive cultivation may be clearly seen in the following photograph taken in the first decade of the twentieth century.  What appears as terracing is often the result of cattle and farm animals paths that horizontally negotiate the steep hill-sides.  Greasy Creek flows in the center of the photograph of this country of “Creek farmers.” 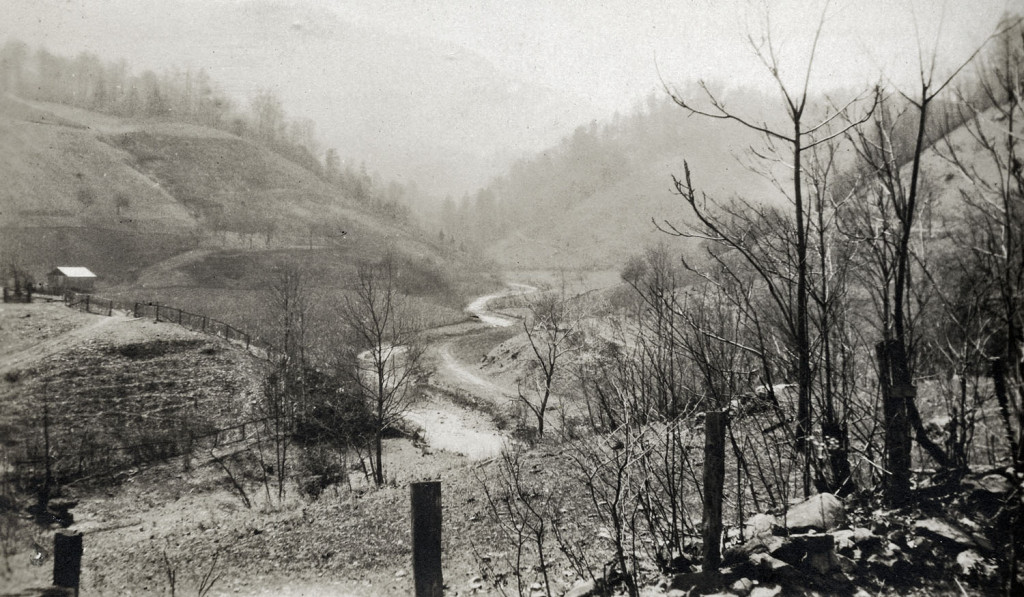 Pettit realized that education would be needed to change local farming practices that were both labor intensive and not sustainable. Following the first consultation regarding the layout of the School and two years after the founding in 1913, Katherine Pettit and Ethel de Long in 1915 again brought consultants from Kentucky State University [University of Kentucky] to the School to hold a “Farmer’s Institute.” It was open to the full community and brought participants from along the valley and hollows surrounding the school.

Marguerite Butler, an early worker at the school describes the Farmer’s Institute

Four splendid instructors from the Kentucky State University have been here for four days holding Farmers’ Institute. It is a splendid thing for this part of the country and you never saw such interest as the farmers showed. Last night one of the men said it was by far the best meeting he had ever had in Kentucky. Of course mothers, fathers and children came for miles around. Yesterday the school cooked dinner for all out in big black kettles in the open . The men killed a sheep Saturday for the great affair. The talks were splendid on the soil and care of it, proper kind of food and why, how to raise fruit trees and poultry, which are both easily but poorly done in the mountains. I enjoyed every single speech. Just about four yesterday afternoon we learned that there was a “meetin” down Greasy five miles. Of course we wanted to go, so in ten minutes one of the men and lady instructors, Peg, one of the older boys here and I started off. I bare back behind Miss Sweeny on her horse. We had wonderful fun and the ride at that time of evening was glorious. I stuck on, even when we galloped beautifully. One of the men invited us there for supper so he rode on ahead to prepare supper. They had made biscuit, stewed dumplin’s and chickens, sweet potatoes and all sorts of good things. These professors said it was one of the experiences of their life. We all walked down to meetin’ afterwards in the Little Log School. I succeeded in falling in the creek, so did Miss Sweeney, as we only had to cross one four times. You couldn’t possibly believe what a meetin’ is like unless you hear it with your own ears. I shall have much to tell you. After an exciting ride home over a black, rough road we got here at 10:15, no worse for the wear. [1914 Marguerite Butler Letters]

Miss Pettit’ s consultation and the broad sharing of the findings of the Institute gave not only the farm program at Pine Mountain its first leap forward. but jump-started the educational process for the local community.  Pettit believed that the farm was central to the success of the school and that it should be managed by progressive and trained farmers. Her plans were large and her enthusiasm was even greater when it came to farming at Pine Mountain. However, she found it difficult to match her vision with the succession of early school farmers whose early departure from this key position was almost as rapid as annual crop rotation,

Fitzhugh Lane, a young boy whom Pettit and de Long had brought with them from Hindman to help establish a garden and some subsistence farming, was the first farmer at Pine Mountain. He did not stay long and was never designated as “the farmer”.  He overlapped with the first designated farmer, Horace McSwain at the School.  He came in late 1913 but also quickly left in 1914.  McSwain was hired to also serve as the manager of the new saw-mill at Pine Mountain. The dual position was likely unmanageable as the rush to construct new buildings was cyclonic. The following note in a letter to the Board in 1913 describes the clearing of land and the multiple duties of many of the staff:

I wish you could know what important work has been done here through these last weeks. The coal bank has been made been made ready for the winter’s digging, according to the directions of Professor Easton and we are now making a road to it. We have had foot logs laid in many places over the Creek and have built a bridge that ought to last for two generations so that we may haul stone to the site of the school house. Miss Pettit has had charge of most important work In ditching the bottom lands. You will be interested to know why she had to give her time for this, instead of Mr. McSwain. He has had to be at the sawmill all the time, largely because he has not known what minute one of his hands would have to escape to the woods. You see this is not a conventional community and many of our best workers have indictments against them, for shooting, fighting, or even being mixed up in a murder case. Since this is the month when court convenes the men with indictments against them are all afraid the sheriffs may be after them….

Mr.[ ?] Baugh, whose full name has been lost to time, is listed as the designated farmer for the year of 1914. It is unclear whether he overlapped with McSwain or if his tenure as farmer was less than a year. He shows up on the staff listings simply as “Mr. Baugh”.   Harriet Bradner is listed for 1915 as a worker on the farm. Leon Deschamps, a Belgian émigré arrived in 1916, hired as the School’s Forester, farmer and teacher.  His tenure was to be the longest to date. He briefly left the School to serve in the Great War [WWI] but returned after a year and stayed until 1927.  During 1918 and 1919 another woman, Gertrude Lansing is listed as a farm worker, but was not the designated farmer. In 1919 Mr. and Mrs. Clarence Dougherty were hired to work on the farm and charged to pick up some of the responsibilities of Deschamps who was temporarily away.  Several staff who had other duties are also listed as farm workers during this time.  Edna Fawcett, for example worked as a teacher, a house mother, and on the farm from 1917 – 1919. Many other staff shared farm responsibilities from time to time.

By 1917 the assets and liabilities of the new school are listed as: